Learn Everything you need to Know 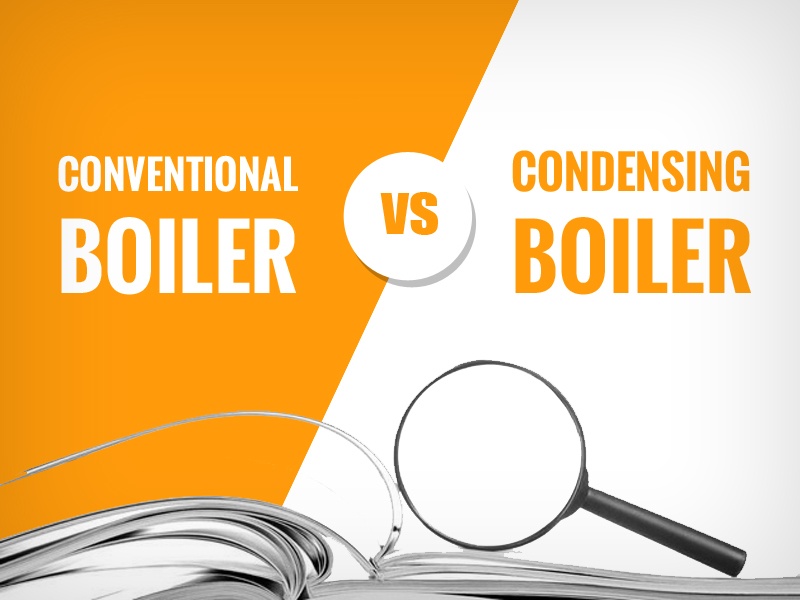 Though condensing boilers have been on the market for over three decades, they are only now starting to replace “conventional” boilers. If you’ve been researching boilers for your home, you’ve likely wondered about the differences between two prominent products.

Condensing boilers work similarly to a conventional boiler in a lot of ways. In the end, the important differences come down to getting high-efficiency boilers vs. standard ones. Condensing boilers are much more efficient in energy use and maintenance, but are also more expensive to buy.

The boiler acts as the primary source of your home’s central heating system. It has a burner that requires a constant supply of natural gas, which is sent into your home from a pipe that connects to your neighborhood’s gas main.

A boiler’s work begins when you open the gas valve. The gas flows into a combustion chamber, where the gasses are burned. These burned gasses are chemically converted into heat and byproducts.

The heat is then transferred to cold water in pipes within the boiler via the heat exchanger, which is a tool within the boiler that transmits heat. The byproducts contain chemical elements such as CO2 and 2H20.

It is how your boiler deals with the byproducts that determine whether it is classified as a conventional boiler or a condensing boiler.

How Condensing vs. Non-Condensing Boilers Deal with Byproducts

Non-condensing boilers, or “conventional” boilers, distributes the byproducts as fumes into the flue, which sends the fumes outside of your home. The fumes themselves are superheated vapors, which means they still contain energy from the gas originally fed into your home.

In most cases, a boiler that uses this system just needs a flue to allow the fumes to escape your home safely. It also keeps the cost of non-condensing boilers down, so they are cheaper to purchase and have less moving parts that can need maintenance or repair.

A condensing boiler works the same but with extra components and functions added to recover some of the heat in those fumes to save and re-use the energy. This makes them much more efficient, as it does not require more gas and energy use to make up for that lost heat.

The extra parts include either a large heat exchanger surface or two heat exchangers. The recovery of this energy happens when the superheated vapor moves through the heat exchanger. At this point, the vapor cools to an extent.

When the vapor is cooled to a low enough temperature (called the dewpoint temperature), the vapor condenses and turns into a liquid. This is where condensing boilers get more complicated. This liquid contains corrosive chemicals. It will wear away at the heat exchanger or your chimney, whatever it touches.

That’s why condensing boilers condense the vapors within the boiler itself. This has two benefits. First, it helps recapture the heat lost in the flue vapor more efficiently, since it never leaves the boiler. Most importantly, it avoids any corrosion caused by the condensed vapors.

Here’s how it works:

Regardless of which heat exchanger design the condensing boiler uses, it is capable of converting more of the superheated vapor into heat. In the end, more heat goes into the water for radiant heating to reuse the energy. This saves on gas use and energy to generate more heat to make up for what escaped.

Advantages of Condensing vs. Non-Condensing Boilers

These important differences in design and functionality give condensing boilers several advantages over a conventional boiler in exchange for a higher price tag.

Regardless of whether you’re running a gas or electric boiler, the process is not exactly friendly to the environment. The heat passing through your boiler’s flue contains carbon dioxide, a harmful chemical to people and the planet.

A condensing boiler recaptures much of the heat that is released as carbon dioxide by a conventional boiler. As a result, it does less harm to the environment.

The reduction in energy waste also allows condensing boilers to be much more efficient in the amount of electricity, gas, and oil if you have an oil boiler. This will be reflected in your monthly energy bill, so you spend less to maintain the same level of heat for your home.

However, older conventional boilers can sometimes run at barely more than 50% efficiency, so a move from an older boiler to a condensing boiler can potentially save you 50% of your energy bill. Check your present boiler’s energy factor to get a relevant comparison number.

When it comes to a condensing oil boiler versus a conventional one, the efficiency difference is even greater. Oil boilers are more expensive than gas boilers, and oil is more expensive to use as well. However, if you use oil it can pay for the more expensive costs up front after about 5 years.

So if long-term efficiency and energy savings is important to you, consider a condensing oil boiler.

One of the main reasons why condensing boilers still have not completely taken over conventional boilers is that they are more expensive. This is because the different system requires more parts, more complicated components, and higher quality materials.

To recoup this higher initial price in the form of energy bill savings, you will need to ensure that you can benefit from the 90% and above efficiency that condensing boilers have to offer. That often means having to run your boiler during most of the day.

Running a boiler all day might make sense if you’re a landlord or commercial property, but less so if you’re a homeowner.

If you’re at work all day, you likely aren’t running your boiler as much if at all. However, if your home needs to be heated constantly for any reason, or if you have a warm-water swimming pool, you might find it makes sense for you.

When installing a condensing boiler for the first time, there are necessary alterations and additions to your auxiliary system that they need to perform:

A greater concern for energy efficiency, both from a financial and environmental perspective, has led to condensing boilers to become more popular. However, it can be difficult to find a local HVAC company that sells, installs, and services them.

This is because they are still new technology and require additional expertise to maintain correctly. As condensing boilers become cheaper, homeowners are starting to ask about or demand them more frequently.

This will ultimately lead to more HVAC companies being forced to adapt. Generally, if your HVAC company offers condensing boiler installation and service, you can trust that the company is up-to-date on the latest in boiler and HVAC technology.

A condensing boiler is better for you if you:

A conventional boiler is better for you if you:

Ready to start? Call or click here today to learn about how much a condensing boiler can save you!